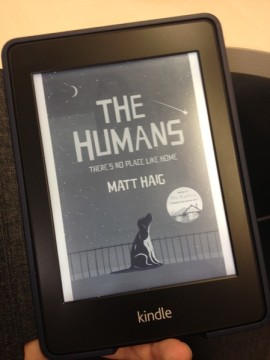 The Humans by Matt Haig (Canongate Books: 2013) A first person novel narrated by an alien who takes human form to shield the human race from mathematical discoveries it’s not ready for yet. Things get complicated when the alien in question starts feeling stuff though.

This is one in the back of the net for Twitter. Matt Haig is a guy I’ve followed in the twittersphere for a few months. He tweets pretty regularly about writing and language and bookish stuff in general. And that was where I was happy to leave our relationship.

Then I noticed he’d published a new novel. Then I noticed said novel was doing rather well. Then Amazon kept trying to recommend it to me. So I gave in and clicked my way to my own Kindle-flavoured copy.

To begin with, I wished I hadn’t. For the first few pages, I thought I’d stepped into another promising-premise-annoyingly-mistreated mess. The start of the book was full of irksome wonderment at the set-up. I got a little impatient with the amount of “oooh, how wired is that” type statements. Like a mildly amusing joke repeated once too often.

Then it got good. In fairness, it only took a chapter or two. Haig started to warm up, and the more in his groove he got, the more I started tapping along too. A quarter of the way in, I knew I was on to another winner. The second read in a row where I got “that” feeling; the one where you never want to put the book down, and when you’re forced to, you can’t wait to pick it up again.

When he was in full flight, Haig delivered on his twittershpere promises. There were sections which took my breath away, phrases and sentences and paragraphs which reached out of the page and slapped me around the face. And it wasn’t just his language, it was his ideas as well. There are some beautiful ones in here. Some observations and some questions that make you whoop.

The good bits of this book (especially the “Advice for a Human” chapter) make me feel plain guilty for pointing out the flaws. But I suppose I ought to.

For all its strengths, there were plenty of clumsy moments in The Humans. It never fully left behind that too repeated naivety of the first few pages. Every now and then, a plot development or a general wondering from the protagonist stuck out awkwardly. As useful a vehicle as the premise is to showcase Haig’s writing and his philosophising, it also leads him down a few boring blind alleys.

Two in a row! Score!

Honestly, a book with powerful writing and meaning of life type questions was always going to get my vote. Those are two things I just can’t resist. Like Pringles.

Next week, something less good, or the hall of fame will start getting crowded.