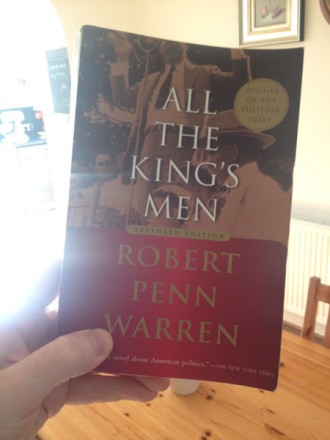 I’d never heard of this, but apparently it’s a bit of a classic. Maybe it’s more of an American thing. Whatever, it landed in my lap and I gave it a crack.

It takes a little getting in to, but once you are in the mix of it, boy are the rewards worthwhile. Rich doesn’t cut it. This thing chugs along with a rhythm that knocks your socks off, then tickles your feet to make you squirm with glee. Or it did me, anyway.

The plot meanders around quite a bit, with frequent detours. You start off with the rough and tumble of the politics, thinking that’s going to be the nub of this whole thing. But the side streets you’re led down add such meaning and colour and depth to the narrator’s character that when you’re done with it, the politics seem almost incidental. Sure, this is a book about the rise of a man-of-the-people politician in the corrupt South. But also, it’s not that at all. It’s about the nature and meaning of living. It’s about being a human being. It’s an exploration of an individual who is complex and interesting and familiar.

Which is a total tosser thing to say, I know. It sounds pompous. But it’s bang on true. It’s all laid out so painfully beautifully – the emotion, the motivations, the conflict, the philosophizing – it packs a Tyson sized punch.

Which is why books kick the pants off of films. Try and do this on the screen in 120 minutes or less (and a couple have tried) and there’s just not the room. All that cringey stuff, it only works because you’ve got the weight of a well-built context, and you’ve had the time to build a connection with the characters. It breathes.

It’s a surgical skill, no doubt, building all this stuff just right so that when the profound and heavy thoughts are dropped, they land just right. And boy did they land right in this book.

What’s more, there’s a whole bunch extra here that I’m sure I missed. Stuff that I could sort of notice, just around the corner. A little extra depth that I could see was there but couldn’t quite keep up with. But in seeing it, in recognizing it was there, I felt an exhilaration. A goddamn rush.

And I loved it.

The big guns. Reminded me a lot of Steinbeck in its tone and feel. And I love Steinbeck. But he never smacked me quite as hard as this did.

Next week, from renowned classic to little known debut author. We like to change it up.