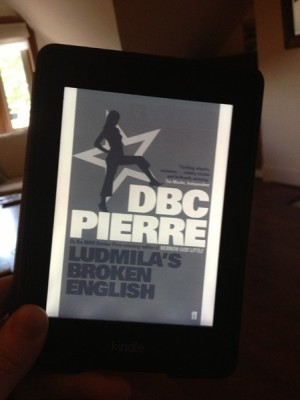 Ludmilla’s Broken English (Faber & Faber: 2006)Two (until recently, conjoined) twins take their first steps out of a care-home environment, treading nervously through London and arguing over whether to go forward or back. A remote household in a warring corner of the Caucuses sends one of its daughters out to find fortune in a last bid to survive. As the chasm between these two scenarios gets ever narrower, Pierre keeps us entertained like only Pierre can.

DBC Pierre rocked my world with Lights out in Wonderland. Then I went and got myself a second dose by picking up Vernon God Little. It’s not until now, after deep breaths and a bit of emotional distance, that I thought it safe to return to the well and pick up Pierre’s other book; the less critically acclaimed Ludmilla’s Broken English.

It’s a risk, reading the less mighty examples from one of your favourite writers. You put yourself right in the path of a disappointment train. But it’s important I think, if only to teach myself that DBC Pierre is indeed not God.

If this is the worst book Pierre ever writes though, he’ll be doing well. It still crackled for me. Certainly for the first third or so, Pierre still managed to pack so much punch into every sentence that I sat there with an inane grin on my face.

I don’t know if he’s one of those guys that works over every sentence to get the absolute most out of it, or if this stuff just comes spewing forth, but he describes things and people and places and feelings and thoughts in brilliant Technicolor. He has one of those styles that just makes you feel alive to read.

I say for the first third or so – I did notice a distinct drying up of inspiration in the middle. It felt like Pierre got a bit bogged down, maybe in the constant shifting between the two main stages the plot is played out upon. There were still flashes, but the middle third felt a bit mechanical; a bit like he was writing to write rather than to inspire. The language became less of a feature. The plot drifted a little. The characters seemed a little stuck.

His ventriloquism should be given a bit of a clap of its own before we get down to scores (the more so because it’s been criticised by others, and it’s criticism I disagree with). It’s more apparent here than in his other books, but Pierre can inhabit a character with the best of ‘em.

There’s a bunch of Yorkshire dialogue and verbal ticks which he plays on with comical and emotional results. Likewise, when he shifts to the depths of the Caucuses, he invents a whole new set of phrases and voices that inject hilarity and farce, along with no small amount of warmth.

Through the voices he masters, you develop a deep link with the characters. A link which gives his devastating finale all the more grit and impact, (about which I will say no more, as I’m of course committed to a no spoilers approach…).

which is still pretty darn good. OK, maybe it’s a bit dictated by my prior hero worship, but you can’t blame a guy for that.

Pierre has a selection of short fictions and thoughts coming out soon (which I’m desperately trying to get a preview copy of, piggy backing shamelessly on the email he sent me months ago). I also hope to see him speak at an event in Oct, which I’ll tell you all about. So that’s something to look forward to.