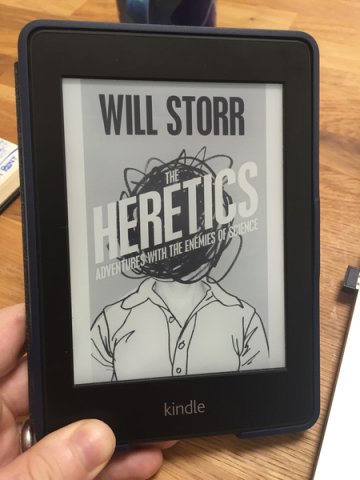 The Heretics by Will Storr (Picador: 2013) Storr undertakes to find out why people believe what they believe, whether that be that aliens are among us or that science is the unquestionable method. In so doing, he spends time amongst some very interesting people, both sympathetic and the distasteful.

I’ve been neglecting non-fiction for way too long. I can’t shake the suspicion that it’s going to be dry and boring, and lacking in any drama or beauty whenever I approach it. But I can’t give it up entirely. And Josie Long recommended this one. So it seemed as good a place as any to get back on the horse.

I tend to  assume non-fiction is lacking a sense of story. It’s inherent in the title. We equate fiction with plot; tales constructed with the purpose of entertaining. So when you see non-fiction, the temptation is to translate it as non-story.

That, of course, is pants. Non-fiction has plenty of story. And Will Storr constructs a fantastic one here. On the one hand, this book is a study on the workings of the brain; an examination of why we create our own stories and narratives and beliefs, and why they have such a powerful control on our outlooks.

But, on the other hand, it’s also about Will Storr. Storr is a great writer of non-fiction, because he gets down and dirty with his subject matter. It’s not a dispassionate reckoning of the facts at hand. It’s not even a neutral narrator’s account. Storr is front and centre, in the way academic practice tells writers not to be, but in the way that makes for compelling story-telling.

Storr and his exploration through weird and wonderful scenes gives this book character and personality. The glimpses he gives of his own internal struggles lends greater depth to his passionate and sympathetic portrayal of the struggles of others. And his honesty in presenting his conclusions, including the flaws he believes are inherent in them, give this whole thing an incredibly readable quality. Sure, he sacrifices an element of academic rigour for it, but if you wanted that you should be reading proper journals.

But, for all that, it’s the structure of this that makes it pop. Each chapter is an adventure. Each one starts with story first. With anecdote. With stylistic, literary flourishes that brings them to life. Each chapter is a gripping short story. Add in the inherent fascinating quality of the subject matter at hand – why do we think what we think – and it’s a pretty darn effective combination.

And a word on that subject matter. I usually try to tell you what I think of books, not simply summarise them in different words (you can get that from the dust jacket), so I won’t go too much into the actual content. But trust me, it’s atomic. It revealed things I didn’t know were there. It made me look inside and question stuff. After reading it, I went out and told people about it; about what I’d learned. It’s powerful potatoes.

I really enjoyed this. I’ve recommended it to a bunch of people already. I even bought it for Father GBR for Father’s Day. So it seems only fair that I recommend it to you in strong terms as well.

I’m sure that’s the first time ever there’s been two maximum scores in a row. I’m not getting soft, I promise you. I just double enjoyed the last couple of things I’ve read. I’ve been lucky like that.

Next time, something Father GBR recommended back to me. We’ll see how that goes.