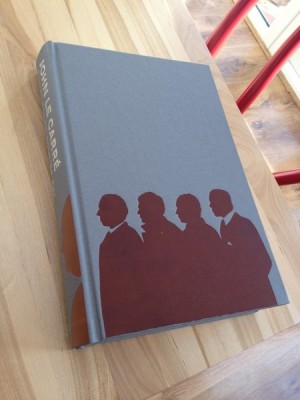 My beautiful copy from the Folio Society (courtesy of Mrs GBR)

Tinker Tailor Solider Spy by John le Carré (Hodder & Stoughton, 1974).There’s a Russian mole at the top of the British Secret Service (or is there?). Disgraced former bigwig George Smiley is tasked with flushing him out (or is he?). Doing so means working against the service he’s loved (or does it?).

Here’s one straight from the “I must read that some day” pastures. I watched the film with you back in ’11, and walked out the cinema feeling dumb and confused. But you hear people go mental over this book, holding it up as a mighty mighty example of what a spy novel should be. Not all ski jumps, come hither eyes, and fates decided at the poker table. Instead, an honest, plot driven, thriller with barrels full of atmosphere and suspense.

So I finally got around to it. Enough time had passed since watching the film. Time to dive in.

What I got was what I expected. A shadowy world of pretty objectionable men, broken women, and enigmatic Russians. The pitch was close to perfect. Le Carré created an utterly believable and highly detailed spy world, and all achieved whilst showing off his show-don’t-tell storytelling skills.

You don’t hear this often, but I loved the jargon in this book. Sure, it jerky to begin with. But it persists, and once you get your head around it, it stops being confusing and starts becoming colourful. It bring dashes of imagery to the otherwise grey and brown pallet. And the more you get comfortable with it, the more feel you’re being initiated into the coven. You’re one of the cool kids, because you know what the “circus” is, and who “the lamplighters” are.

So yeah, cool plot and just the right amount of spy-world feeling. So far so expected. I tell you what I wasn’t expecting though. I wasn’t expecting le Carré to be a characterization ninja as well. The cast is brilliant. He fills each person out, even some of the more minor ones, without banging on and on about how such-and-such is a prick now because he hated his daddy, and all that jazz. No tin-pot psychology or awkward exposition, just brilliant character building.

The masterstroke is the Russian big-wig, Karla. In the whole book, you spend maybe ten pages in the presence of this dude, and even then only as the subject of an anecdote. But despite that, his quiet charisma dominates big sections. You get a strong sense of the man without ever meeting him. That’s some raise-your-hats skills right there, and they should be applauded.

No silver lining comes without clouds though. In this case, the clouds came in the form of all sorts of corners being painted into. Le Carré set up such a brilliantly grey atmosphere that, whenever the plot called for a bit of action, it didn’t quite come off for me. Little attempts at humour or light-heartedness felt forced too. The result was enough little corners sticking out from the prose to keep this from a big big score.

Still pretty good though. And I watched the film again straight after putting the book down. Makes way more sense now. Way more.

A couple of very strong scores to start the year off. I can’t help but think I’m due a dud soon…