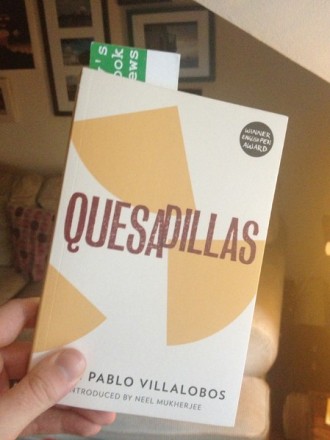 Quesadillas by Pablo Villalobos (&otherstories: 2013) The story of Orestes and his (similarly Greek-ly named siblings) as they stumble through childhood in a remote Mexican landscape, judging the wealth and stability of the nation by the weight of their mother's quesadillas. An outspoken father, newly rich neighbours, a running-away-from-home episode, and a dysfunctional extended family conspire to help Villalobos explore a flawed society. Oh, and there’s some bovine insemination too. Obviously.

A good ole fashioned physical book, with pages and everything. I decided to take a Kindle break with this one. Aside from being caught out trying to flip pages by touching them, or mark paragraphs by wiping my fingers insistently on the paper, this was fun. Also, it was more difficult to balance my coffee and my book whilst standing on the commuter train. Kindle’s are definitely more commuter friendly. Which is a fact I’m sure you’re massively interested in.

But the book, the book. This is a translation from a Mexican feller who (I’m lead to believe) is fairly big biscuits. And it’s not difficult to see why. Whether it’s his talent or his translator’s, this is a smooth read. A little disorienting at first, but he settle’s you in double quick. There’s absurdity and exoticism (at least to these thoroughly British ears), but you never feel too out of place with it all.

That deserves a whoop of its own, right there – Villalobos presents a mightily strange place, but doesn’t waste time with orientation. Instead, he lets you enjoy the quirks rather than get bewildered by them.

This is one of those books where there’s a fair amount packed between the lines as well. The absurdity is the warm-up act for the satire which runs behind the plot all the way. There’s a sort of appendix with a brief bio of recent Mexican presidents, each written with a bit of comic fatalism. I’m not sure it’s needed. Feels like he’s hammering the point home a little there, letting this drift a bit too far away from novel and a bit too close to political treatise.

But then I can’t blame the guy for being a bit serious about his subject matter. As funny as the situations he describes are, it’s all tinged with reality, which gives it a bit of punch. His characters are persistently and comically hopeless, but after you’ve chuckled, there follows a “hmmm” moment when you contemplate that this has its roots in the real world, in the dramas of Mexico’s recent past.

In that way, it’s a bit like Waugh (and I love me a bit of Waugh). He takes the central failings and flaws in his society, magnifies them, makes a farce out of them, encourages you to laugh, but secretly teaches you a lesson. With Waugh, it was the absurdity of decadence. With Villalobos, it’s poverty and corruption.

Not that Villalobos is as tall a writer as Waugh. I enjoyed this and all, but Waugh is Waugh, and Villalobos, though decent, is not.

A smooth read, a few funny bits, some thoughtful points made, an incredibly weird ending, and perhaps a drift too far into the political with the appendix.

By the way, this is published by &otherstories, which puts out books that others won’t take a risk on based on a bunch of people supporting them beforehand. It prints the names of those supporters in the back, and gives first editions to each of them. I’m one of those guys, which is fun. You could be too with a few clicks.

Next week, maybe one of the Man Booker Long-list, if I finish it in time. If not, then anything goes!