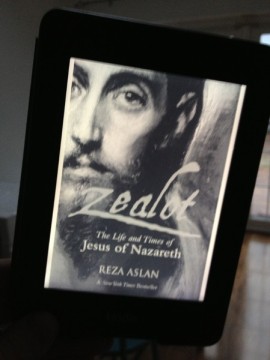 Zealot by Reza Aslan (The Westbourne Press: 2013)A biography of Jesus of Nazareth, which attempts to identify the historical figure as distinct from the Christ. Simple.

See, this is one of the reasons I love history. Taking huge stuff and looking back to the point where it started. I love that whole “tree from an acorn” crap. No one battered an eye-lid when Hitler’s paintings weren’t selling, and yet… No one gave a stuff when Rosa Parks decided the best way from A to B was by bus, and yet… No one noticed when I made a New Year’s resolution to start a book blog, and yet… The rest is, as they say, history (*insert obligatory smug guffaw at own gag*).

And this has got to be as big as it gets. Looking back at Jesus of Nazareth as he grew up and led a short lived messianic march through the desert into Jerusalem. It didn’t end well for him. We’re talking three years, from John the Baptist to the cross. We’re talking one of hundreds of dudes (they were always dudes) who claimed to be sent from God to free the Jews. There were a bunch who were way more successful than Jesus, and made way bigger waves at the time. But here we are, a couple of thousand years later, and entire chunks of our history have been defined by Christianity. It’s tough to imagine a world without it.

I love that stuff. That "from obscurity to legend" jazz. And so I came to this book fairly excited.

Zealot lived up to a lot of the expectations. No doubt, this is a story in which there’s debate everywhere you look. Pinning down the biographical truth of a fella from two thousand years ago, and about whom there’s been gazillions of words written and tales told, is a tough task.

But Aslan (the writer, not the lion) cut through all that stuff. He didn’t give the reader a book full of “maybe this happened, but some people think this, and others think that.” He cut a straight line through the facts and the best guesses, and delivered a coherent narrative. One which was readable and understandable.

But you know what? Ever since I read HHhH, I’ve had to look at non-fiction a bit differently. Usually, you get the “it reads live a novel” endorsement for the well written history stuff. But then HhHH came along and changed the ballgame. That book stood up in its own right. No qualification. It was exciting and compelling and all that other jazz. It wasn’t “like” anything. It just was hold-onto-your-pants awesome.

Zealot, whilst pretty cool, isn’t HHhH. As a history, as an ambition, it’s top notch. But as a book to be judged alongside all the others? I’m not sure.

It had interesting facts and stories bursting out of it. I still feel excited about it. But the writing had rough edges. The writing was that of a highly accomplished historian rather than that of an honest-to-goodness storyteller. It got a bit repetitive here and there (I suspect in an effort to keep the casual reader up to speed). The structuring of the story didn’t quite pack the punch it could have, and it ended on an abrupt note.

Which is harsh critique, but then HHhH has set a new bar.

Go read this. Then give me a ring and we can talk about it. It’ll be tons of fun.

Next week, a bit of a scary one, if I finish it in time.