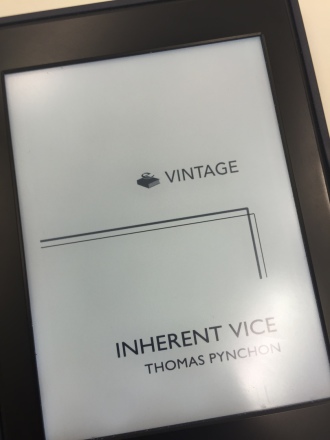 Another inspiring front cover from the good people at Kindle

Inherent Vice by Thomas Pynchon (Vintage: 2010) Doc Sportello is part groovy hippy, part private detective. When his ex walks through his door, spouting stories of plots against her and her new squeeze, Doc promises to help in his own laid back way. But then they disappear. And there’s a murder. And other assorted odd goings on. Doc picks his way through the mess, and remains unflapped throughout.

I admit it. This was a book that I was sold by a film. And I didn’t even watch the film. I’d just seen a bunch of trailers of this new Jaoquin Pheonix film, realized it was based on a Thomas Pynchon book, and got super intrigued. The film seemed off-beat, and I’d heard good things about Pynchon without ever diving in. So what the hey, why not give it a shot.

The book, like the film trailers, was definitely off-beat. But not in a Fear and Loathing in Las Vegas or a Last Exit to Brooklyn sort of way. Not in the way that you end up simply not recognizing a structured world as you understand it. More like just stuffed with odd people and odd plot developments. The whole world and mindset that Pynchon describes, psychedelic 70’s California, is so alien to me. And it was fun to live in it for a while. A bit of escapism.

And he does that well. There’s a voice through the whole book that is both out-there and identifiable. Even though the characters are nutso, you can’t help but root for them, and even understand them (to a point).

I ploughed on, because the individual scenes where entertaining, but I’ll be damned if I could tell you too much detail on how the scenes stitched together, or the back-story to more than one or two of the central characters. It was crowded. Which may have been on purpose. It may have been Pynchon trying to create a bit of chaos, and reflect the crowded, flowing, free nature of his stage. But it just ended up bugging me.

A couple weeks ago, I damned a book because it did the unthinkable and became boring. This book was perilously close to doing the same. But the writing and the voice saved it for me. Mostly, I enjoyed reading about Doc Sportello, even if I didn’t have a clue what was going on most of the time.

Next time, a thriller with an odd perspective.