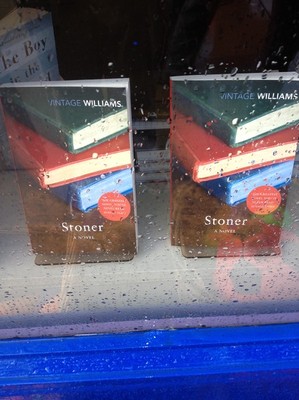 50 year old book in all the book shop windows.

Stoner by John Williams (Viking Press: 1965). This is a near 50 year-old book about a professor in an out-of-the-way US University, whose major life events involve discovering a love for literature, a tiff with a student, and a power struggle with his wife. But it’s suddenly found itself on every best seller list going as a whole new crowd of cats discover it. How comes?

It’s going to be incredibly difficult not to come off as a total tool in this review. I’ve written it twice already and had to start over. This time I’m just going to write it, and if it ends up dripping in pretension, tough bananas.

My difficulty is this is a tricky book to translate. It’s a bit brilliant, but when I tell you why, you’re going to yawn. It’s one of those that creates its own world, and in that world, ordinary things take on a staggering magnitude. It’s the strong, silent type; the type that makes you care intensely about the twists and turns of a pedestrian life.

To call them twists and turns is even too much. More like gradual corners. The kind you don’t need to break for. It’s all laid out there in the set up. In the first page or two, you’re told that this man, William Stoner, was born, lived a bit, died, and then was mostly forgotten. Then you’re given the 400 page version of the same story. Sure, there’s the odd bit of acceleration, but there are a lot of long silences, supressed emotions, and words left unsaid as well.

So far, so boring.

Then the meaning of the whole thing creeps up on you, and you begin to realise the WHY. You stop waiting for the plot to heat up or the story structure to take root. The point of it all starts to come slowly. And then it’s not slowly anymore. Then it’s all at the same time, and you realise you’re reading about life. And it makes you want to cry a bit (I didn't though. Not even a little).

It's not a dramatic life. Not a historical life. Not even an epically tragic life (though there’s tragedy here, for sure). Just life. Except, it can’t be “just” life, can it? Life is all we have. It’s where all of the everything comes from. It’s where the wonder is. Our own lives. The real ones. The ones we live. The one Stoner lived. It, in itself, without baubles and without an orechestra, is bloody amazing.

Argh! I got all pretentious again there. Sorry. It’s this book. It makes you do it. It has the quality of an old movie. That one you got caught watching on Film4 during the day when you were waiting for the BT man to come. It’s black and white, and slow, and comfortable, but it’s grand and meaningful as well.

I almost didn’t give this a 10 GBR purely because we had a maximum only a few weeks ago. Then I realised that’d be a jerk thing to do. So I didn’t. I promise, I take 10 GBR's very seriously. It's just this deserved it. And so did The Merman.

That puts a lot of pressure on the next book up, right?