we have always lived in the castle - suspense 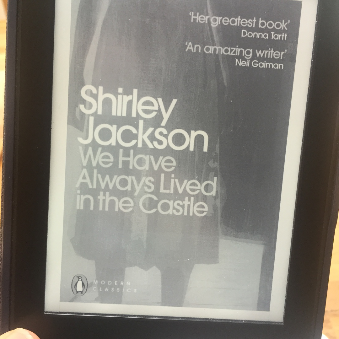 We Have Always Lived in the Castle by Shirley Jackson (Viking Press: 1962). Mary Katherine lives in a big house on the edge of town with her sister and uncle. A terrible thing happened in the past, and the townspeople remember it well. More terrible things are still to happen though.

I have never, not once, read a book so packed with suspense. It’s like one of those American sandwiches which look like they couldn't possibly hold any more wafer thin ham, and then the guy at the counter grabs a fistful more and stuffs it in. Jackson just keeps piling suspense in here until you have genuine concerns whether the bread can hold it all.

But those ninja skills are important for the buckets full of suspense to actually work. They’re crucial. You can’t just have suspense. You need to know how and when to reveal stuff, little things, in a way that keeps you gripped without giving the game away. It’s a tease, but one that doesn’t work unless you want what’s being dangled.

And you want what Jackson is dangling. The first person narrative helps; Jackson plonks you inside the mind of a narrator who is distinct and on the edge of sanity. She’s unreliable narrator in extremis. So you hunt for stuff, between lines and between words, to find out what the hell the truth of the matter is.

There’s also a supporting cast which is equally bonkers and difficult to pin down.

Honestly, my mind was racing so fast throughout the whole of this book that I must have come up with a dozen different theories to what was going on; to what the truth of the terrible thing was and to how the whole thing was going to play out. I began questioning everything, and hungrily reading on to find the answers.

The sense of time and place is important as well. It’s eerie in the best way. Not gum-store Halloween. It’s grand and austere and uncomfortable. You feel like you’re walking on egg shells when you're reading, which is dumb; it’s a book. There’s no earthly reason you should feel so out of place. But you do. Because Jackson is a ninja.

Yup, I enjoyed this pretty good.

Next time, something less uncomfortable.