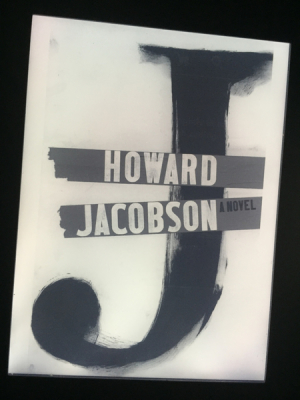 J by Howard Jacobson (Jonathan Cape: 2014)An odd sort of future where “something terrible” has happened, and society has stuck it’s collective head in the sand, trying to overcome it by not mentioning it and apologizing all the time. But currents still run, and pasts are slowly revealed, to seismic effect.

Ultimately, when I put this book down, I sat there thinking wow, that was a bloody good book. But I hadn’t always thought that as I was reading it.

At various points in the book, I got frustrated by the mystery in the story, and by how much was being unsaid. It felt as if I was having to get my head around a whole new black hole every time I sat down. That may have been my own fault for being dumb and inattentive, but I spent a lot of the time confused.

Of course, that may have been by design (which is the luxury we afford renowned writers, right? If it’s bad, then perhaps it’s supposed to be?) As the truths did start to unravel (and again, I may have been a bit slow on the uptake with them), a lot of the atmosphere, and the disjointedness, and head hopping amongst characters started to make sense. Sure, it was an uncomfortable and shifting world Jacobson created, but there did seem reason behind the chaos by the end.

Despite my indecision over the story telling talents on display, there’s no doubt Jacobson can write. There’s some sparkling, shining, pulsing sections that hit home hard. He has no trouble whipping up images and emotion. And when the story telling was eluding me, the strength of the writing helped carry it through.

Then there’s value of the meaning to weigh up too. J gets you thinking, hard. It feels big and important, and not in a pretentious way. In a way that makes you feel a bit breathless by the end, and keen to keep the conversation going. It’s profound. It’s heavy. And it’s worthwhile.

So in all, I reckon that pans out as an

Honestly, I do think my confusion at the beginning was in part my own fault, reading the book as I did in snatched five minutes. I think Jacobson is trying to make us feel uncomfortable and uncertain at the start, but my added inattention probably tipped it over the edge. I read the last 100 pages in one run, and that breathing room gave the book a helluva punch.

Next time, a new writer for me, that every reviewer seems to go stark raving nuts for. High hopes.