London Fields - it's the writing, idiot 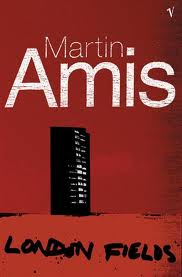 London Fields by Martin Amis (Jonathan Cape: 1989) Nicola Six knows she’s going to be killed and by whom. She’s always known, and isn’t that bothered about it. As she puts her convoluted death plan into action, she’s followed around by a visiting writer with his own death issues, who writes it all down for our benefit.

Firsts, soz. Took a few weeks off there. Three to be precise. But I’m back on it now, returning to my regular best. Promise.

You guys know me well enough now to understand that I’m a language junkie. I like a book that can run through intelligent themes with language that explodes. Muscular writing, it’s sometimes called. Whatever, I dig it.

So I picked up this with a bit of a drool from the get go. I read Lionel Asbo a while back, which was my first Amis, and so felt I had the measure of this guy. I was confident he had a writing style and approach to story-telling that was going to be up my street.

For the most part, this did indeed float my boat. Amis has got to be one of the least lazy writers I know. Not for him the lazy metaphor, the obvious sequencing, the unexplored thought. He works his sentences and his characters so hard that you are kept on your toes throughout.

Amis develops quirks and perspectives and scenes that are so distinct and so fun that a lot of the time I was just sitting back with an inane grin on. In fact, I highlighted more passages in this book than I have done in a long time.

But with such a “muscular” approach came a few difficulties. As he leaves the obvious behind, he also leaves some basic storytelling in his dust. This isn’t quite abstract to Will Self levels, but there were portions when it took me a little longer than I’d like to figure out what was going on.

He focusses on theme and feel so doggedly that he lost my attention every now and then. Sure, it adds to the enigmatic feel of the book, and certainly a bit of mystery does wonders for some of the characters, but he trades off some old fashioned “story” to achieve it.

Honestly, I liked Lionel Asbo a little more. In fact, Lionel himself feels like a more developed incarnation of one of the characters from this book, Keith Talent. Lionel Asbo was shorter, and hung together more coherently, without losing some of the punch and beauty of the writing.

But, frankly, if you want beautiful writing, I’d direct you back towards Glen and DBC. If those guys are out of town though, then sure, pick up a bit of Amis, but start with Lionel Asbo.

UPDATE: just found out they’re making a film of this, which I did not know about when I picked it up. Small world, huh?