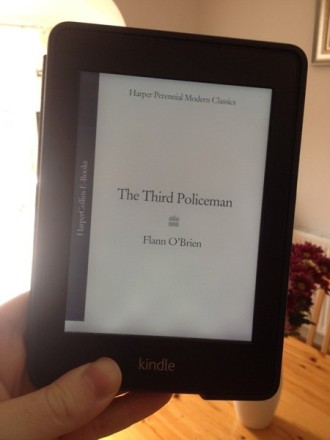 Another junk front cover from Kindle. Come on Kindle, sort it.

The Third Policeman by Flann O’Brien (Dalkey Archive Press: 1967)A tale of an odd chap who finds himself thrust into an adventure involving bicycles which are loved too much, boxes that are too perfect, impossible eternities, and a bunch more to twist your melon.

Aw jeez, I’ve got that “it’s not you, it’s me” feeling again. I’ve struggled through this book in snatched five minute reads here and there for a couple of weeks, never giving it a fair crack of the whip. So here I sit, self-appointed judge and critic, about to empty both barrels on a book that never stood a chance. What’s more, it’s a book which has received the kind of impossible praise that makes you nervous to event whisper a criticism.

Maybe I should look at it less personally. Like the book’s going to get all offended and cry. Like I have a responsibility to it. The problem is, that’s one of the things I love about books. They become more than pages when you read them. They become little buddies with voices and character and hurtable feelings.

Yeah, it’s been a long week, and I may have gone a bit fruit loops.

Look, I like absurdity. Silliness is a good thing. Check out Puppet Shows for some thoughts on it.

The problem with absurdity though is that it’s a short drink. Put it in pint glasses and plan a whole evening around it, and you’re going to get overwhelmed, and not in a good way. There gets a point when it just gets plain exhausting. A point where you want a bit of relatable reality to ground the thing.

With short stories, you can get away with it. With longer ones, I need a bit of a breather from the wackiness every now and then. But this guy was relentless. The whole thing was like some psychedelic dream, albeit related in sober prose.

And yeah, it was made worse because I read it over a period when I didn’t have much energy and concentration to pour into it. I wasn’t of a mindset to strap myself in and commit to the rollercoaster. I’m sure I could read this again in a more fallow period and enjoy it more.

And you know what, there were some redeeming factors. There were some clever thoughts. There was some impressive lateral thinking which made me smile. Some out-there theories based in nuggets of logic that made me pause every now and then, impressed at the brain and imagination behind it. And when I noticed that stuff, I slapped myself on the wrists for wasting the book with my own lazy approach to it.

But push to shove, would I recommend you read this too?

Probably not, but there’s enough of a chance you might like it that I won’t go further south than 5.

Next week, I dunno, maybe I’ll read a book?