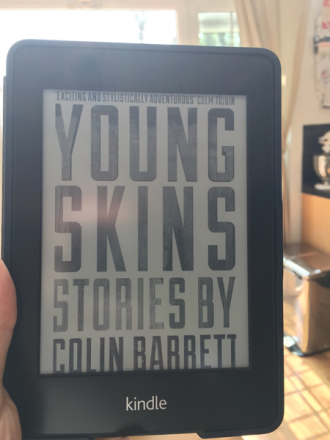 Young Skins by Colin Barrett (Stinging Fly Press: 2013) A series of short stories from an Irish writer who’s getting some mad props. Like, crazy mad.

I read a book before this one that I didn’t end up reviewing, for various reasons. Suffice to say it blew, and for all the reasons that made this book a blast of fresh air.

Barrett, as far as I’m concerned, has magic fingers. He does stuff that I have no idea how to do. He creates stories that don’t really seem to go anywhere, but are vivid all the same. Of building characters that are relatively unremarkable, but fascinating too.

And that’s tough to sell. When someone asks what the stories are about, there’s not much to say. They’re all in fairly deprived settings in Ireland, and focus intently on a handful of characters whose lives are familiar. So far, so dull.

But Barrett creates quiet explosions of meaning and pathos and joy and magic by delving deep into the worlds of his characters. You connect with them. Nope, not enough, you fall in love with them. For the period in which you’re in their world, you’re immersed, and each story’s end brings with it a jolt back to reality, and a longing to spend more time with the character that has been cruelly taken away from you.

I’m overplaying the lack of plots a bit. At least a couple of these do have more traditional explosions in the storyline. The longest piece (which is almost novella length) certainly has its twists and turns, and a more recognizable structure and pace. But that’s not what made me want to pick this up at every opportunity. There was a little bit of I-wonder-what-happens-next, but mainly, I was just stone-cold head over heels for the people and the places that Barrett put on the page.

I know a lot of you will read this and think, “well, that’s lovely for you, I’m glad you liked it. What? Am I going to read it? Nah, probably not, I prefer plot driven novels.” And that’s my fault for not explaining this properly…

I like plot driven novels too. Try drag me away from a Bernard Cornwell when I get stuck in. But I promise you, when I say that these stories have an irresistible feel, I’m not being artsy fartsy. I’m not being pretentious. I’m not trying to convince you you’ll like something that is, at it’s root, boring. I’m saying that these stories will take hold of you in the very best way. I’m saying that the lack of intrigue in the plots is compensated in a huge way by the heart in the themes. I’m saying that I’m pretty sure you’ll fall in love with this too.

Come on. How could I not go for the big points after that. This book rocked.

Next week, a long overdue return to non-fiction.