The Fault in our Stars - suckered 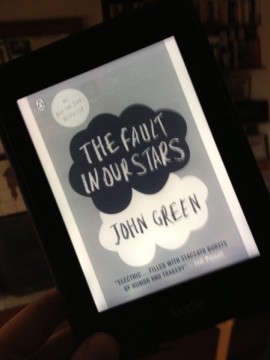 The Fault in our Stars by John Green (Penguin: 2013)A YA novel narrated by sixteen year-old Hazel, an American girl with terminal cancer living a secluded life on bought time. She meets Augustus Waters at a support group meeting, and they hit it off in a Romeo and Juliet way. Cue scenes of gentle romance and inner turmoil and they both try to deal with love and death without descending into soap opera territory.

There are zero reasons why I should like this book. None. Zilch.

It has a know-it-all 16 year old girl as the main character. The story is driven by the kind of other-worldly teenagers Dawson’s Creek lived on – the kind that have impossibly high levels of wit, confidence, charm, intelligence, maturity, self awareness, philosophical insight...you name it, these kids have it in unrealistic spades. The adults are portrayed as hopelessly blind; less worthy extras to be applauded every time they come up with an independent thought. And every page is charged with high flung emotion.

In short, it’s the kind of world and cast that stereotypical teenage girls wish existed. And I’m no teenage girl.

So I say again, I should not like this book.

You’re not dumb though, you’ve guessed that I did. I liked it a lot. And here’s why.

I sprinted through it. When I wasn’t reading it, I wished I was. I haven’t had that for a while; that book you want to grab five minutes with whenever you can because you’re just so damn compelled. Sure, the actual characters are not remotely like real people, and they hit you around the head with the emotion-hammer every chance they get. But for reasons I do not know, I bought into it all. I bought into the relationships. I bought into the teenage girl’s voice. I bought into everything despite myself, and once I’d done that, there was no hope for me.

So how’d it do it? How’d it make me like it against all the odds? Well, there’s the entertainment factor. Hopelessly idealised as they are, the characters put on a good show. If you let yourself, you will be entertained. The writing’s too good for you not to be.

Then there’s that rich seam of intelligence which runs through the whole thing. Sure, it’s disingenuous that it’s all coming from a teenage girl, and a lot of it is so overt that it verges on show offy, but there are genuinely worthy debates and insights running the length of this.

Then comes the emotion. Pathos isn’t the word. Mix love and death and you’re always going to get a pretty potent cocktail. Don’t get me wrong, I knew the relationships were impossibly intense and I knew the death was being handled in an impossibly mature and distanced way. Panic and selfishness would have been more believable emotions. But by that stage I’d forgotten believability was important. By that stage, I was just being entertained. By that stage, I’d bought my ticket and I simply wanted to see how these perfect teenagers ended up.

I’ve decided it must be magic. It can’t be anything else. I could say it’s the way it’s written. I could say the author draws you in expertly and blinds you with his talent, so much so that you forget all the reasons you should hate this book and instead just give in to the world he creates. But that doesn’t seem enough of an explanation.

So I’m going to stick with magic.

I can’t believe I just gave this book a 9. But it damn well deserves it. It suckered me right in.

It’d be too easy to let book-snobishness get in the way. Give it a chance, and if you’d don’t agree with me, you’re going to have to tell me exactly why.

Next week, I have no idea, but then I know how you like surprises.