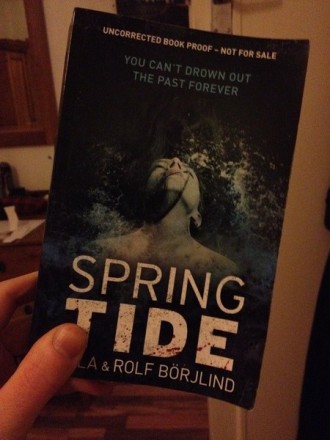 Spring Tide by Cilla and Rolf Börjlind (Hesperus Press Ltd: March 2014)Twenty odd years ago, a woman was drowned after being buried up to the head on a beach. Today, a police student is chasing down the details of the murder, a pursuit which gets weirder and more complex than she bargained for. A first novel from the husband and wife screenwriting team behind the TV adaptation of Wallander (amongst other stuff).

You know what’s tough? Trying to be fair about something you plain didn’t enjoy. Especially when the publisher has taken the trouble to send you an advance copy. And more so when you loved one of their previous.

The problem is I’m starting to think I just don’t like modern crime thrillers. Classic ones, sure, sign me up. I literally can’t get enough Agatha Christie. If it wasn’t for the fact I need to blog a different book every week, I’d be quietly working my way through her back catalogue as we speak. But the modern stuff? I’ve now tried two, and both have left me flatter than a hedgehog on the A1.

I mean, I get it. These types of book aren’t great works of art. They’re plot driven excitement-bubbles with twists and turns. The problem is, unless I care about the people, and unless I believe the twists and turns, I just don’t get caught up in it.

The Börjlind’s (don’t even get me started on a husband/wife writing team – how the heck does that work?) try to cover character depth with a sledgehammer (presumably one each). They just tell you stuff. Sentences like "that was what she was like" cover entire character factors. And then suddenly people are getting all emotional and building life-long attachments before you even believe they’re real people at all. Even the quiet, reflective moments are hammed up.

Subtlety is not the game here. The bluntness starts off as refreshing, for about five seconds, and then it’s just bad writing.

But, like I say, that’s not thepoint of it all. Modern crime thrillers are about plot and structure, right? And sure, there’s a bunch of that here. The structure is pretty solid. The plot has the requisite twists and the usual turns. It has the feel of a decent example of the genre.

Which brings me back to my original quandary. Difficult for me to laud a book if it’s of a genre I simply don’t jive to. For me, it’s tough to admire a solid structured book if there’s no art there. Difficult to admire a well-built house if there’s no architecture, right Kevin? (I’ve been watching too much Grand Designs). Even when the end comes, and you’re supposed to be invested in this merry band of crime solvers, it just doesn’t work.

Now Christie, she could create warmth and relationships without losing sight of plot and mystery. It can be done. Christie isn’t exactly modern, but surely crime writing is crime writing? So maybe it’s not a fault of the genre. Maybe it’s a fault of this book.

Not my cup of tea. I’ll give one more modern crime thriller a go before I give up on the genre I think. Time I tried some of that Lee Childs stuff everyone’s been going on about. I know one Bec player at least who’s a fan.

Next week, another preview of a book I’m actually quite excited about from this gal.